From Meta
< User:Anpang
Jump to navigation Jump to search

This is a draft of an essay. Even though it is in my userspace, you are still welcome to edit it. 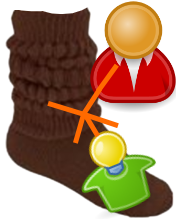 What socks are like[edit source]

If you have the suspicious accounts, request a CheckUser sock check on the stewards' noticeboard.
Finally, use common sense to see if the detected socks are disruptive.

From time to time users will mean well and create alternate accounts recently after their block locally/lock globally for a 'clean start'. If the (b)lock was made for disruptive behavior, this won't work. A few days, a week, even a couple months rarely makes a difference on what escalated to action in the first place, and action is taken against a user/their behavioral patterns (ideally after some warning has been given, unless the disruption is all there was from the start). It is not an issue of time. It is an issue of actions and faith. Only by appealing properly to the local administration/the Stewards respectively (for blocks/account locks) will progress be made. Creating accounts again and again merely reduces any faith that did exist, and makes it harder to appeal and avoid scrutiny of actions if you do return. Abusing accounts on local wikis can also be escalated to global intervention, resulting in something that was just a block becoming an account lock and further damaging your ability to bring what decency you may imagine for Miraheze.

For example, you're in a situation where you've gotten a negative reputation. Don't make socks and act like a different person to make people not think you're the one that has the negative reputation - you'll get caught by users and moderators, mainly using CheckUser. Plus, your reputation will also go down when you're caught, and everyone will now know you are a puppeteer and will be aware that you may create another sock, effectively forever making your reputation lower.

It's better to apologize for your mistakes, and continue with your original negative-reputated user account rather than let it continue. It's better that way. Instead of lowering your reputation by creating socks, your reputation will stay stable with the same account. You'll also start to gain reputation if you do good things. See the user accounts policy for more information.

Retrieved from "https://meta.miraheze.org/w/index.php?title=User:Anpang/Socks_are_stinky_essay&oldid=240357"
Cookies help us deliver our services. By using our services, you agree to our use of cookies.