For the users who provided their username and wrote something in the "something to share with us" section, we have replied to you. Please also check your Spam/Junk folders.

Note: Whenever we refer to "people" or "users", we mean the users/people who participated in the survey. Also, if the number of responses is not mentioned, you can assume it is everyone that participated (90)

90 users in total participated in this survey.

What is your Miraheze username? (use 'Anonymous' if you want to remain anonymous)

What is the URL of your wiki? (if you have multiple wikis, please choose one)

How many wikis have you had created at Miraheze? 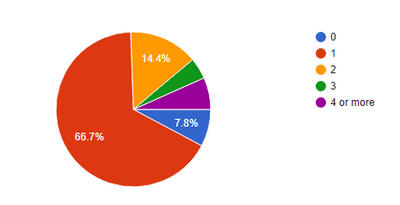 Why did you choose Miraheze?

How do you know about Miraheze?

Note: There were a lot of "Other" responses since some users wrote different variations of the same thing. There are still some "Other" options but ones that were similar were resorted.

It seems like most users found us by "Google Search", the next source is the MediaWiki page.


Who mostly uses your wiki?

Some answers here were a bit too specific, as the question indicated *mostly* so there were also a lot of "Other" responses here.

What is your wiki (mostly) used for?

Note: There were a lot of "Other" responses since some users wrote different variations of the same thing. There are still some "Other" options but ones that were similar were resorted.

The majority (31.1%) use their wikis for educational purposes, while 16.7% use them for Non-profit purposes, and 14.4% for gaming purposes.

Wiki creation speed: Most people were satisfied with the time it took to create their wiki.

Speed of applying configuration changes: There were different answers for this the configuration requests question. When ManageWiki is implemented, this should no longer be an issue. 2017 Survey feature requests.png

Uptime (being able to access the site): Uptime is very important for any site/wiki. The answers were generally good, but uptime is also something that needs to be improved.

Overall satisfaction with Miraheze: This one also had generally good ratings, with most users answering between 8-10. There are also some users who do not seem very satisfied with Miraheze.

Which ways did you know about to contact Miraheze?

Most users knew at least one of the ways to contact us, some people knew several, or even all of them. There were still 12 users who chose the "I don't know" option.

What do you think should be improved at Miraheze?

I will be listing the main points mentioned here:

These are all good points, only unfortunately, there is nothing we can do about the login issues and WikiForum, as we are not the authors of the extensions and it is up to them to fix the issues.

What new services/features would you like to see available at Miraheze?

I will be listing the main points mentioned here:

Most points here are possible, and some such as ManageWiki and Statistics are already ongoing projects. For the rest, they could be possible, except advertising, since it is against our Privacy policy and we do not want any advertising on our wikis.

What could we do to improve the rating for any of the previous questions?

Most of the answers here were keep up the good job :D There was also some that said improve uptime.

Would you recommend Miraheze to a friend?

It is very nice to see that there are no users that wouldn't recommend Miraheze to a friend, the majority answered YES but there are also 6 (6.7%) maybe answers.

These, as long as the other long-text questions have been answered by email. Please check your Spam/Junk folders as well

Retrieved from "https://meta.miraheze.org/w/index.php?title=Miraheze-2-year/Survey_results&oldid=30293"
Cookies help us deliver our services. By using our services, you agree to our use of cookies.